Marcus Sibley and I were interviewed about our chapter called “Transforming Campus Rape Culture in Canada: Lessons from Complexity Theory.” The interview was part of a series of podcasts by Susan Marine and Ruth Lewis related to their new book: 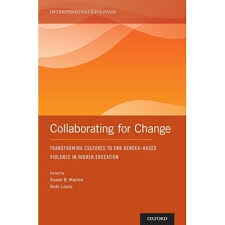 Collaborating for Change: Transforming Cultures to End Gender Based Violence in Higher Education.

This blog appears on https://inherentlyhuman.wordpress.com

A few years back, my friend and I attended a panel discussing a Facebook group, the “Gentlemen’s Club,” that several male dentist students had set up.[1] The postings included sexist and misogynist comments about female classmates and the panel set out to address how to respond and promote a more respectful campus culture. I met my friend 25 year ago, while we were both undergraduates. At the time, she worked in women’s organizations and provided advocacy for women experiencing violence. But she had been away from that world for many years. At the end of the panel, my friend turned to me and announced her surprise that nothing had really changed in 25 years.

Her point was twofold. The attitudes revealed in the “Gentleman’s Club” echoed those on campuses during our undergraduate years. That hadn’t really changed. But her point spoke to another way in which nothing has changed. She felt disappointed that, in 25 years, we had not developed much new thinking about the problems. It struck her that we still doing the same kind of work to respond to the same old problems.

The “Gentlemen’s Club” presents only one example of current problems on Canadian campuses.

In recent years, Canadians have been confronted by seemingly endless stories about sexual harassment and violence on campuses across the country. At Saint Mary’s University, my own institution, a video surfaced in 2013 showing senior students leading new students in a chant about rape.[2] That year, students at the University of British Columbia, on the other side of the country, recited the same chant.[3] About a year later, the University of Ottawa suspended hockey players suspected of having participated in a gang rape.[4] Several universities have grappled with revelations about faculty members’ inappropriate behaviour toward students.

These highly publicized events have garnered widespread public condemnation and motivated universities and governments to respond.

In the past decade, we have seen universities develop prevention programs and work to improve their response to complaints. Universities are working on better policies, protocols and services aimed at addressing rape culture, sexual violence and confusion about the meaning of consent. Provincial governments have debated, and some have passed, legislation requiring universities to have sexual violence policies.[5] Other have created more informal agreements.[6]

All this activity builds on work started 20 years ago when campus sexual violence first became visible.[7] My friend and I remember the “no means no” stickers and buttons that littered campus and the “take back the night” marches organized by newly mobilized campus women centres. Since then, many sexual violence prevention and information programs have been implemented on campuses across North America and in the UK.

But, despite all this effort, universities continue to confront issues relating to sexual and gendered violence on university campuses. While we are witnessing a new wave of activity and interest in the problem, nothing has really changed.

The research literature suggests several reasons why programs have had limited effect on campus culture:

These arguments have merit, but my work suggests that we might be using the wrong tools to promote broad cultural change on campuses.

I want to frame the problem in a particular way that I think helps us understand the limitations of the interventions we have pursued. To do this, I draw from those who work on complexity theory.[12]

Those who write about complexity describe three contexts relevant to the research proposed here: simple, complicated, and complex.[13] Simple problems are characterized by repeating patterns. They have identifiable linear, cause and effect relationships. These problems may be addressed with “best practices.” Complicated problems require expertise to uncover the less obvious cause-effect relationships and underlying patterns. While there may be more than one solution to a complicated problem, the resolution is still driven by facts. Complex problems present as “fluid and unpredictable.”[14] Because they are non-linear[15] they require innovative responses and creative methods to uncover patterns.[16]

As Snowden and Boone[17] suggest, fixing a Ferrari presents a complicated problem but fixing a rainforest involves complexity. And campus sexual violence is more like a rainforest than a Ferrari. The “rape culture” that supports sexual violence does not present with identifiable causes and effects and how it will respond to interventions is unpredictable. Yet programs and policies to address it work only at the simple or complicated aspects of the problem. Our responses have relied on facts, best practices, expertise and the search for cause-effect relationships.

Responses to university rape culture have tended to assume linear relationships between causes (e.g., students’ adherence to rape myths) and effects (e.g., sexist comments and sexual harassment). We teach students facts about rape, to counter the myths, and expect their behaviour to change accordingly. And sometimes it does. But we have not seen these changes result in the broad culture change anticipated by many policies, programs and interventions.

From a complexity perspective, our responses to university rape culture have failed to recognize that complex problems do not respond well to solutions that assume static, cause-effect relationships.

With that said, how do we get at the complexity? How do we generate data about the complexity so that we can make decisions and promote actions that promote broad culture change on university campuses?

I am working on a project exploring these questions using narrative research methods. I have asked students about their experiences (what happened?) instead of their opinion (what should we do?). The questionnaire I used, called a signification framework,[18] began by asking students to tell a brief story about an experience. The “story prompts” asked about experiences with sexual consent, “rape culture” and general campus safety. They could write about a positive or negative experience.

The stories ranged from sexual harassment to rape; from annoyances to crimes. Some described incidents that had been covered in the media. They recounted incidents in bars, residences and public spaces on campus. Some stories were about consensual relationships that students felt good about or incidents in which bystanders intervened. But most stories evoked highly negative emotions for students, most commonly anger and worry. Just under half the student said they felt disappointed and one third felt powerless by their experience.

The questionnaire went on to ask students what the stories meant to them. This approach has allowed me to explore patterns in students’ interpretations of their stories rather than my own. Sensemaker®  software[19] is used to identify and illustrate patterns.

Most students thought their stories were more about relations between genders and sexualized culture than individual beliefs. Students tended to think that changing public awareness and cultural norms would have had more effect on their stories than implementing more roles or policies.

Ultimately, the students’ narratives provide a window on their experiences, and how they understand them. Looking through this window will open opportunities to trigger broad culture change so that the next generation of students have a different experience of our campuses.

This blog appears on https://inherentlyhuman.wordpress.com

Funding: the Social Sciences and Humanities Research Council and the Department of Community Services (Government of Nova Scotia).

This blog post is based on a paper delivered by Professor Crocker to the Manchester Centre for Regulation, Governance and Public Law (ManReg) in November 2017. ManReg is based in the School of Law at the University of Manchester.

[2] President’s Council. (2013). Promoting a Culture of Safety, Respect and Consent at Saint Mary’s University and Beyond. Retrieved from Halifax: www.smu.ca/presidents-council/report.html ; Also see http://www.cbc.ca/news/canada/nova-scotia/saint-mary-s-pro-rape-chant-sparks-20-new-recommendations-1.2469851